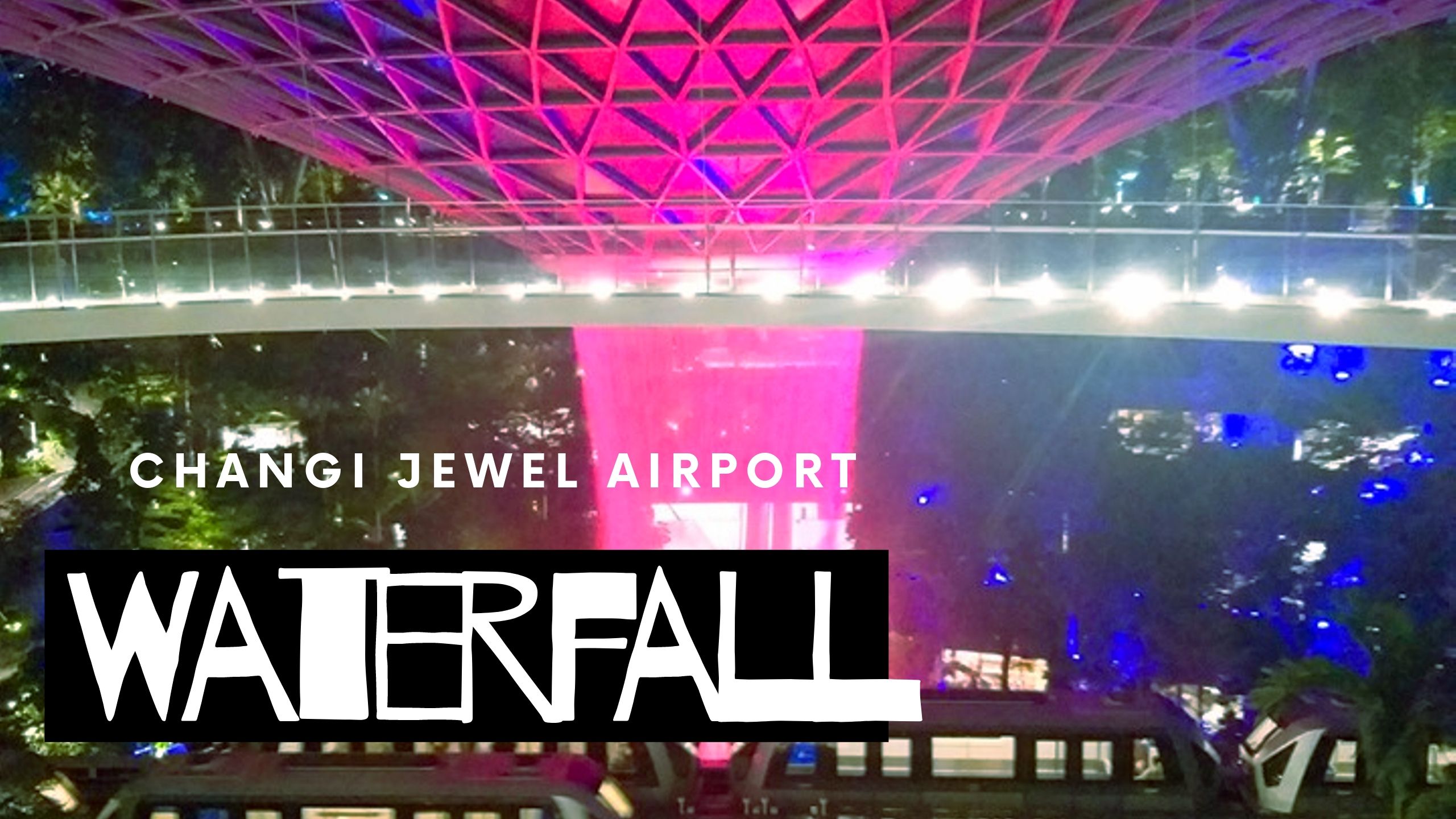 The Jewel Changi Airport Waterfall is one of the largest indoor waterfalls in the world and was an absolutely marvelous thing to witness. Singapore’s Changi Airport opened up the “Jewel,” which is a $1.3 billion mall and lifestyle hub open to visitors with and without airplane tickets. The glass dome features the world’s tallest indoor waterfall is 130 feet tall and is known as “The Rain Vortex”, and it’s worth noting that all of the water is harvested from naturally occurring rain. 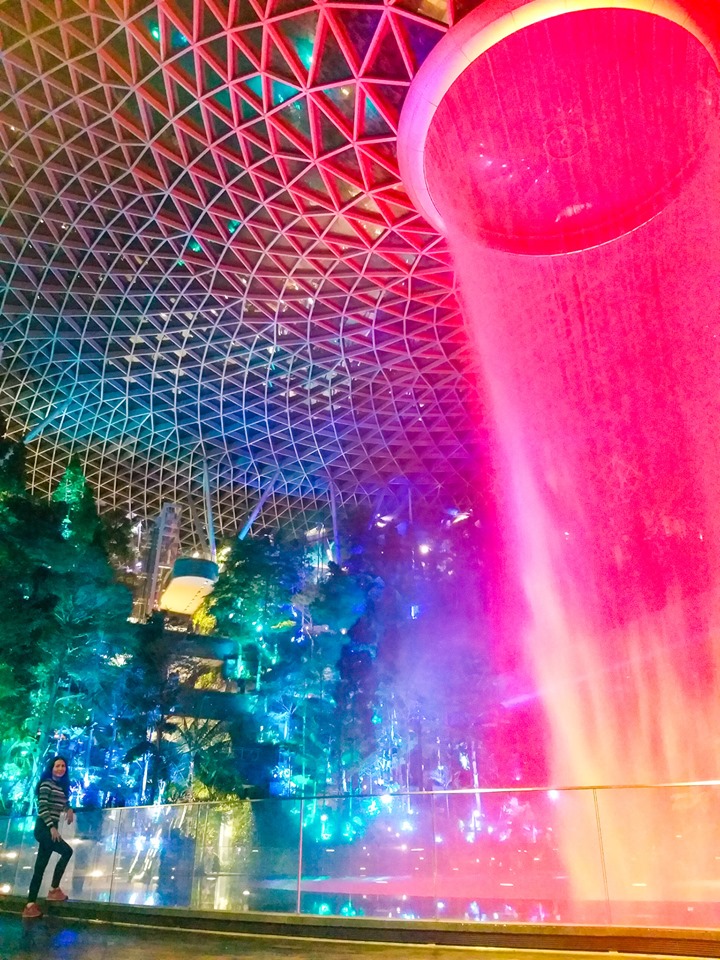 When you get to Jewel you’ll immediately notice the iconic 40-metre high Rain Vortex which is now the world’s tallest indoor waterfall. The inspiration for this design came from the frequent rains in the tropical city-state Singapore. Harvested rainwater cascades through the oculus in the center of the roof and streams down seven floors to Level B2 where you can get some seriously Instagram worthy pics. There’s also an incredible light and music show that happens every hour until about 11pm.

Where is the Jewel Changi Waterfall Located?

For transiting passengers, valid travel documents are needed, since the Jewel is located landside just outside of the airport so you’ll have to clear immigration procedures. Also, it’s recommended that they have at least five hours between connecting flights. 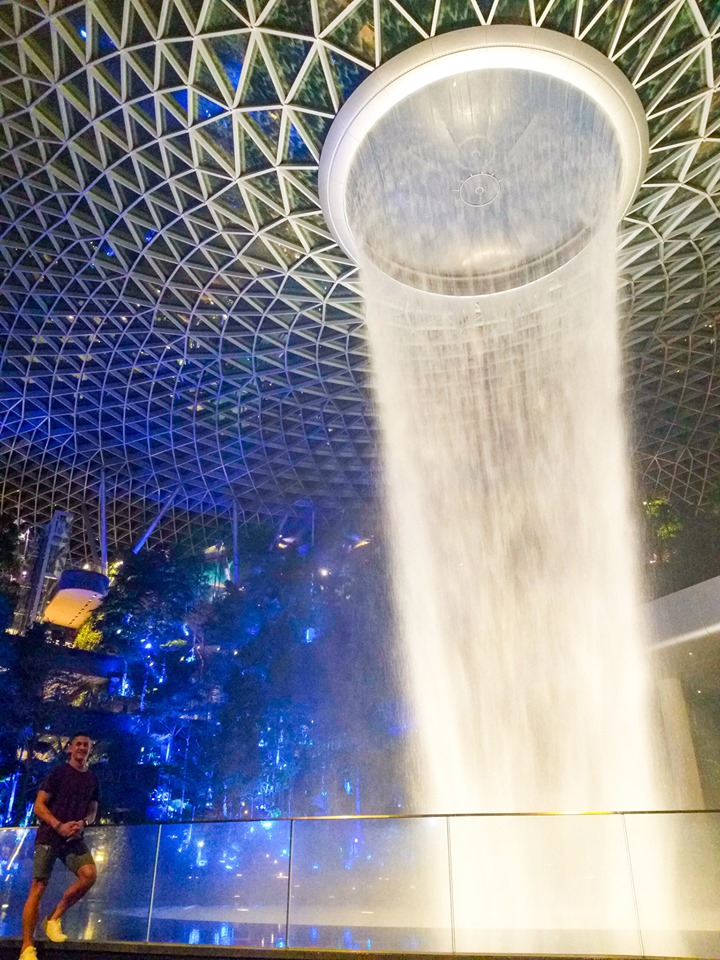 Here’s how to get to the Jewel from all four terminals oat the Changi Airport: 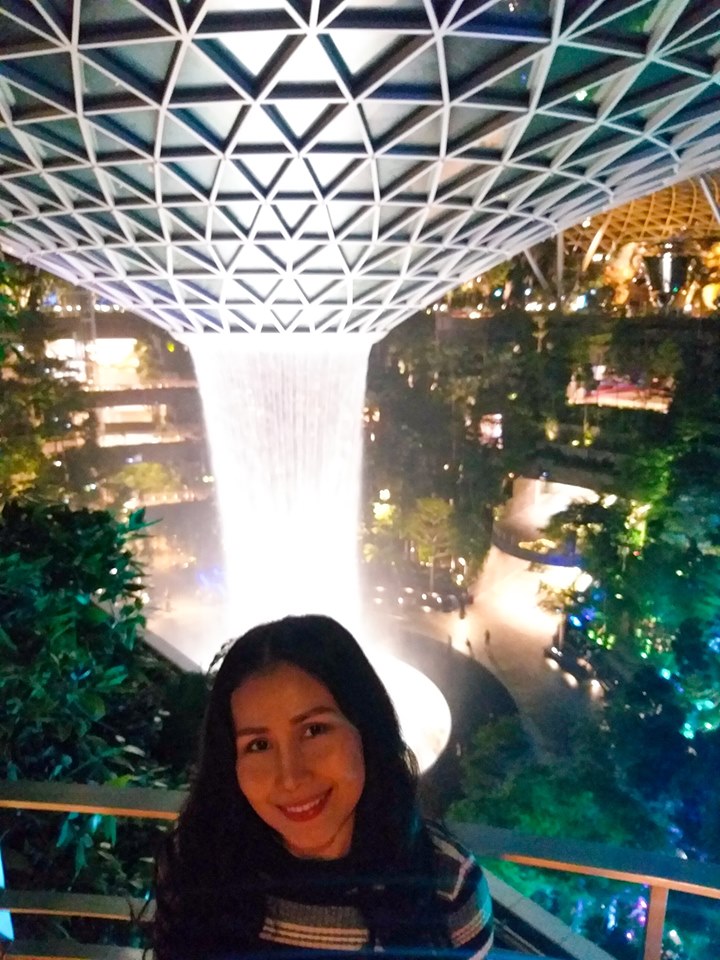 I took the link bridge at T3, which is air-conditioned and has moving walkways nearly the entire way. I walk pretty fast but with the moving walkways most people should be able to get around ina matter of minutes. It only took me around three minutes to get to Jewel on foot after leaving the airport. When you walk over the link bridge, you can also take some good photos of Jewel with the Changi Control Tower beside it or from various other locations above, at mid-level as well as from its base.

What is the Changi Jewel?

The Jewel at Changi Airport is a newly opened mixed-use complex at the already famous Singapore Airport. It covers a total gross floor area of 135,700 sqm, comprised of a large indoor garden, recreation spaces, airport facilities, a 130-room hotel, as well as over 280 retail and food & beverage outlets. 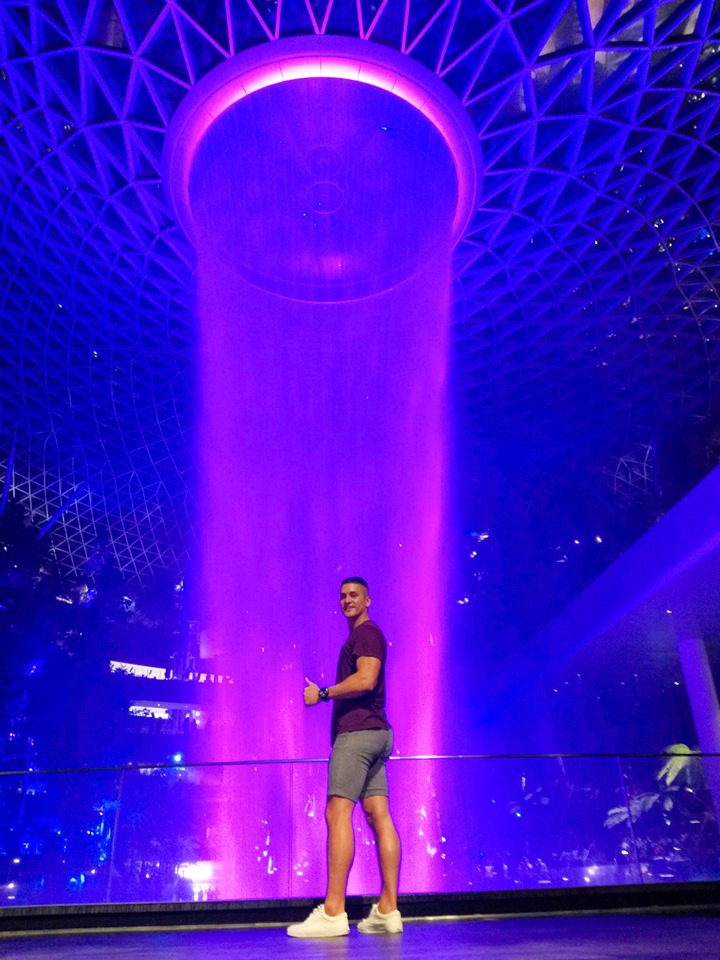 The construction of this $1.26 billion project started in 2014, and it’s built on the former site of the open-air car park for Terminal 1. It was designed by renowned architect Moshe Safdie, whose portfolio includes the Marina Bay Sands which is one of the most iconic buildings in all of Singapore. He also designed the National Art Museum in China, as well as Pearson International Airport in Canada. 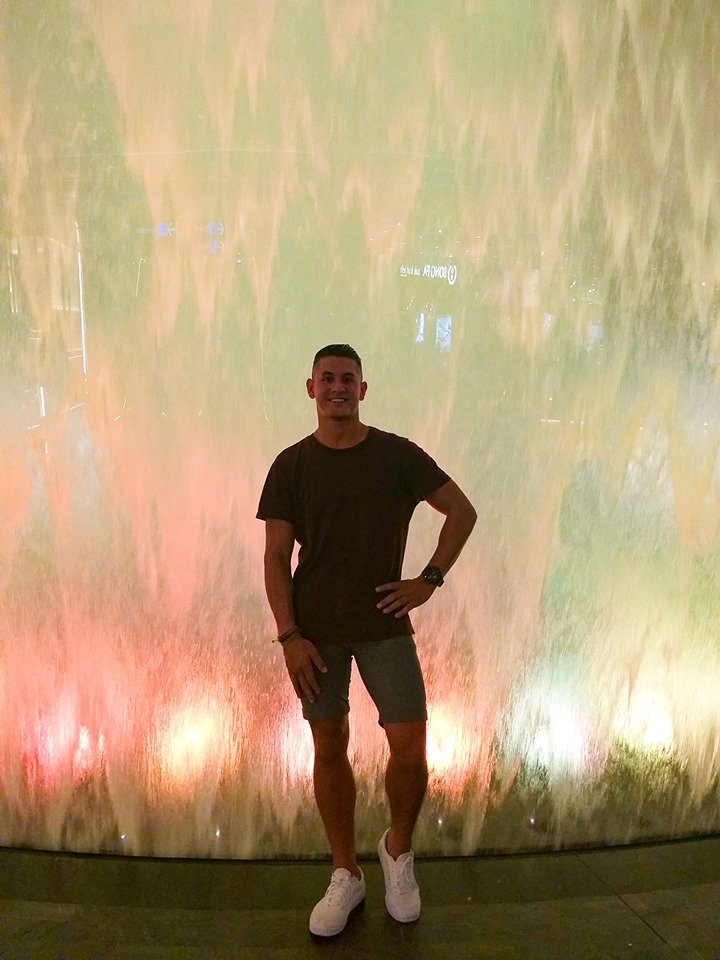 The picture above is another location down below the waterfall where there’s a large underground food court. The intention behind creating the Jewel at Changi Airport was to help travelers choose Singapore as their preferred travel destination or transfer hub. With their top-notch facilities, activities, and entertainment as well as comfortable sleeping areas it’s no wonder it’s one of the best airports in the world. 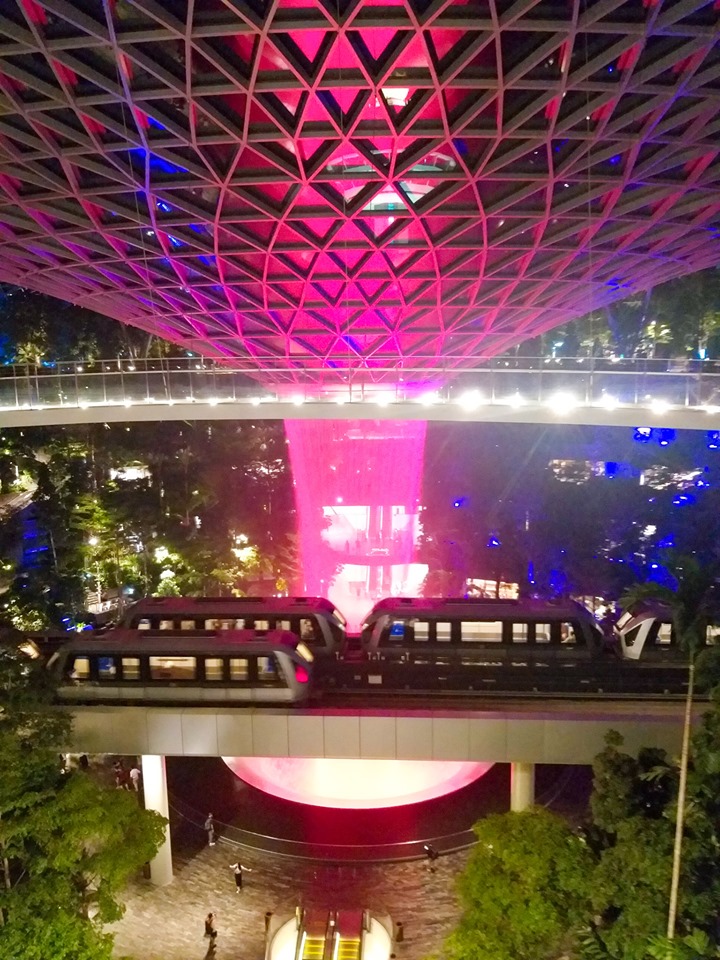 If you don’t have time to exit the airport and clear immigration but still want to see this, then you can take the Skytrain connecting T2 and T3 to see it without leaving the airport. The train runs through the interior of Jewel and though there’s no station inside Jewel. So if you want to catch a glimpse of the Jewel Changi Airport Waterfall without leaving the airport then take this short Skytrain route from T2 to T3 which will allow you to capture a much closer view of the Rain Vortex. 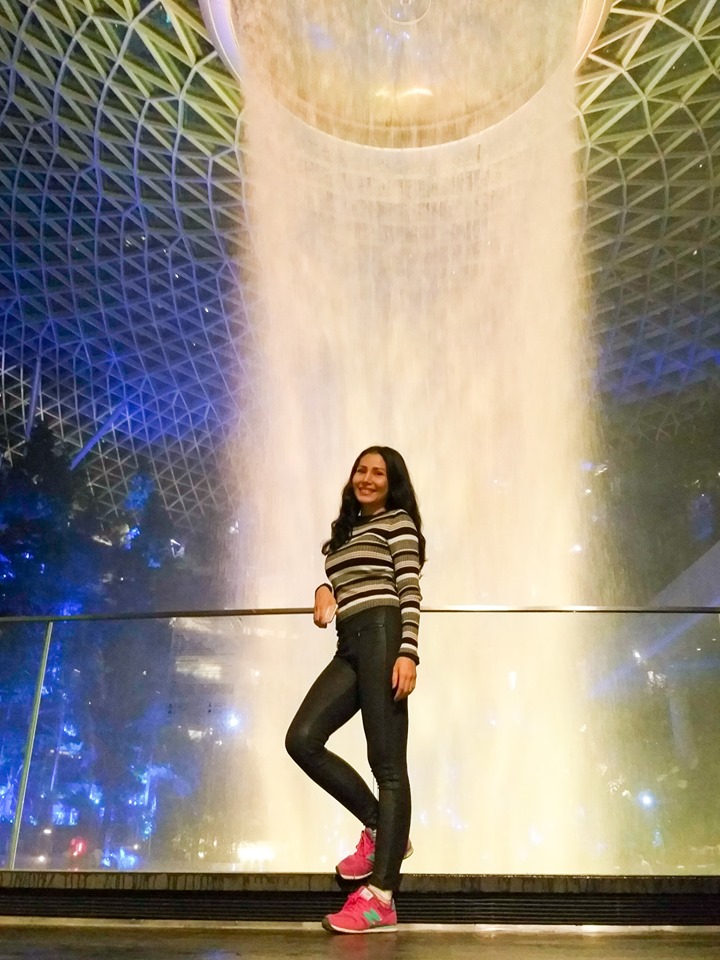