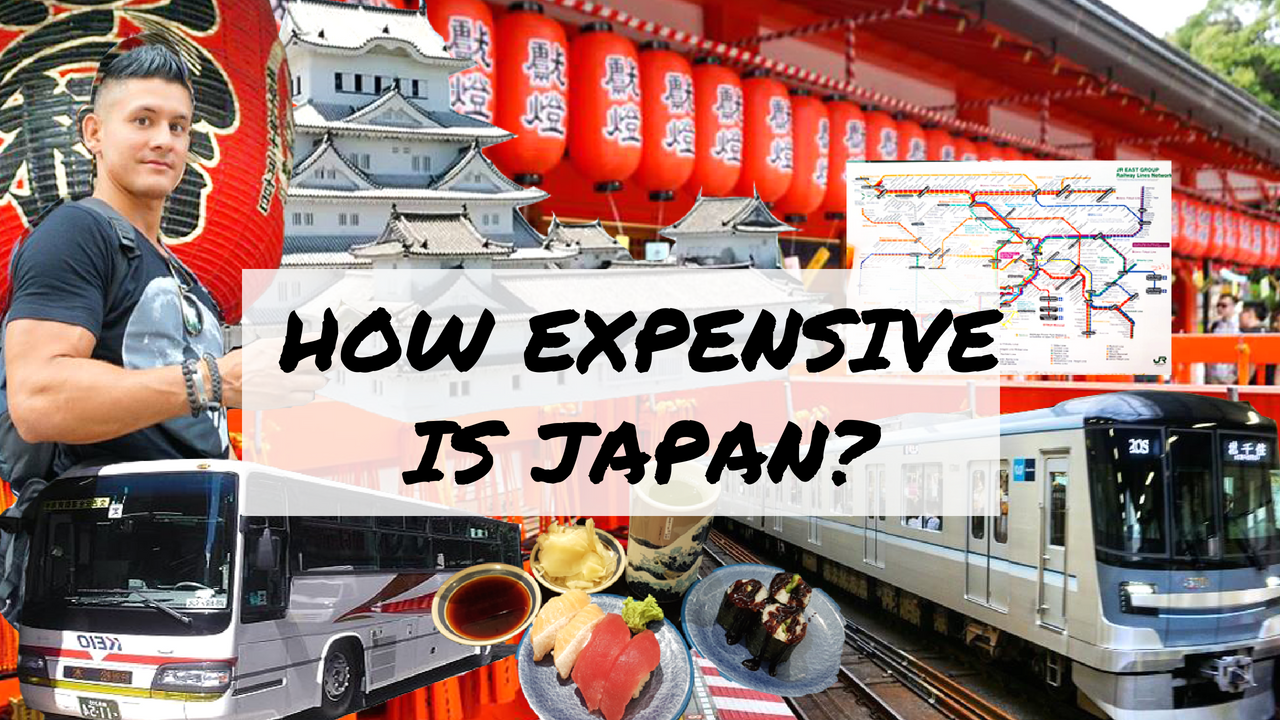 By Nomadic NavaJune 28, 2018How To Posts, Japan, Uncategorized
No Comments

Home » Blog » How Expensive is Japan

If you are considering visiting Japan then one question you may keep asking yourself is “How expensive is Japan”!? I had been putting off going to Japan for a long time because I was afraid I would not be able to afford it. I had heard so much about how expensive the cost of living is there and that prices just kept going up that I began to believe I would never go. I grew up loving Japanese culture and shows like Godzilla and many of their animes and ideologies. I had always dreamed of walking around the bright bustling streets of Shibuya and eating authentic ramen and sushi, visit temples and travel on trains.

I kept putting it off until my recent trip where I spent 10 days backpacking all over Japan. I went to Tokyo, Kyoto and Osaka and was in shock at how affordable some things like food actually are. I finally decided to go and booked a ticket on AirAsia in November as a gift to myself for my birthday and I scored round trip tickets for only $300! My trip was set for June 10-21. Upon my arrival, I discovered that Japan was not even the most expensive country I have visited and was easily comparable to Singapore or many European countries.

Here’s how much things typically cost in Japan and how you can cut down those costs to make the country affordable:

Trains are absolutely hands down the best way to travel around the cities and from city to city but you can also save a lot of money taking the buses.

Transporation was easily one of the most expensive parts of my trips as you have to take a ton of trains to get anywhere in Japan, although convenient it can also be very confusing and costly. If you plan on traveling far north or south or even to Kyoto or Osaka by the bullet train then you should plan on buying the Japan Rail (JR) pass. The pass is indispensable for travel in Japan. Individual tickets can cost hundreds of dollars. 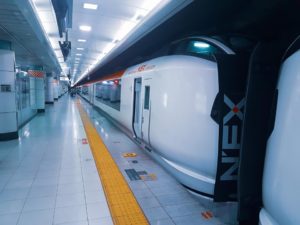 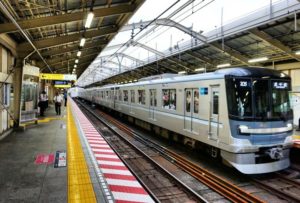 These passes cost ≈ 28,300 yen for 7 days, 45,100 yen for 14 days, and 57,700 yen for 21 days. All pass times are for consecutive travel. Even if you only get the 7 days pass then it’s still the same price as a round-trip ticket to from Tokyo to Osaka. When you are in the bigger cities you can also use your JR Pass to get around as they service most areas instead of additionally buying metro tickets.

You can get a JR PAss for 20% cheaper if you buy online before you arrive but you can now also purchase one in Japan. Passes are available in the following country locations: Sapporo, Sendai, Niigata, Tokyo, Shinjuku, Yokohama, Nagoya, Osaka, Hiroshima, Takamatsu, Hakata, New Chitose Airport, Narita Airport, Haneda Airport, and Kansai Airport.

If you plan on taking the metro around like I did then you should get a Suica, Pasmo or Icoca card, (depending on where you get a card, like Icoca is in Osaka but used everywhere). These are super convenient rechargeable cards you just swipe and it automatically deducts trip payments for you instead of having to buy individual tickets every time. You just find a vending machine at a station and insert 200 yen, it keeps 500 yen as a deposit which you can get back when you return the card later…but I just kept mine for next time ; ).

Most of the city metro tickets cost 100–200 yen (per stop) so the price can vary based on distance. Fares were usually around 200-400 yen to travel across Tokyo but less for shorter distances. In most major cities, you can buy a day pass, which gives you unlimited travel for 24 hours for around 800 yen. 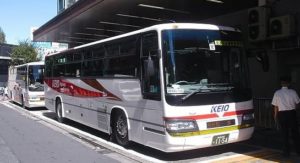 The bus is a significantly cheaper alternative to taking the bullet trains  and there is a station conveniently located at main stations in each city.. For example, the two-hour bullet train from Tokyo to Osaka would cost around $14,000 yen, but instead, I took the night bus which was 7 hours for only 2400 yen! I did the same for my trip back to Tokyo from Kyoto. Although the busses are not as fast or as comfortable as the trains and also may arrive at inconvenient hours like 6 or 7am, the savings are well worth it.

Some of the busses have more comfortable seats or come with a charging USB in your seat so make sure and check for that first. I bought all my bus tickets online at Kosokubus.com which was also way cheaper than Willer Express. There is also bus passes available that offer unlimited travel and begin at 10,000 yen for three non-consecutive days of travel.

Flying is another option but is very impractical and time-consuming to get from city to city when you could just as easily take a bullet train and avoid the check-in, security and travel time to catch your flight which will end up being the same or more anyways. 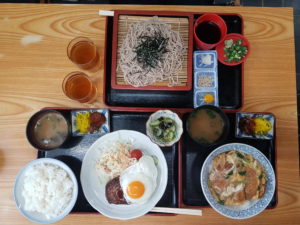 Food in Japan was not only delicious but also actually very affordable, at least if you aren’t in the market for a 20,000 yen Kobe beef steak. You can get a wide variety of ramen noodle dishes from 400-1500 yen.

If you love sushi like me then you can also afford the Kaiten-Sushi aka conveyor belt sushi. These tend to cost less than other sitdown sushi places but are just as good in my book. You can get plates starting for around 100 yen and up depending on the cut and quality.

As long as you aren’t eating sushi every meal, which typically cost me around 1,200 yen, I would say on average I spent 1,500 yen or so on food daily. There are also other affordable alternatives like McDonald’s or other Japanese fast food chains.

The cost of living in Japan is super high, with so many people, limited space and high housing prices this causes an inflation in prices that transfer over to tourists. You can still find decent 3-star hotels with a double bed for around 40,000 yen or more.

Hostel dorms typically cost 1,900 yen per night (sometimes as low as 1,500 yen or as high as 2,700 yen in Tokyo) and hotel rooms start at 5,000 yen per night or more. You can also get nice but very small capsule hotel rooms for around 2,700 or more. These are usually pretty comfortable and come with charging ports and sometimes a tv.

I was actually able to couchsurf for all 10 nights while I was in Japan! This was actually a little difficult because people are so busy working many were not willing to host during the week. I, fortunately, knew a couple of people who lived there that I had already hosted at my place in Phuket. I also ended up renting a hotel in Kyoto one night for 45,000. It came with free breakfast, coffee and juice too.

Couchsurfing is an excellent option though if you really want an adventure, meet new people and move around a lot. Since most of my hosts were off to work by 7 am it helped me get going every day too as I had a lot to see and had I had an option of sleeping in I could have maybe missed out on some things. If you want to learn more about Couchsurfing or check out my profile go here to my profile. 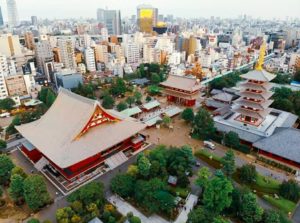 Most attractions like museums, castles and temples were either free or only up to like 1000 yen to visit Himeji Castle for instance. In Kyoto, there’s a temple pass that gives you unlimited transportation and access to the temples for 1,200 yen.

It’s a good deal, considering you’re probably going to see a lot of museums in Kyoto. Osaka and Tokyo have similar passes for their attractions. There is a tonne of free things to see throughout Tokyo, Kyoto, and Osaka too.

How much do you need?

You could easily spend over $200 a day if you’re staying at hotels, eating and drinking every day as well as traveling around a lot either by train or taxi. However, if you do some of the things I did and focused mostly on traveling around and keeping costs down then you should be able to get away with a budget of $100 and this will allow you to see and do just about anything you want. This includes staying at a cheap hostel, eating ramen and cheaper foods, metro rail passes and seeing a few attractions throughout the day.

I traveled to Tokyo, Kyoto, and Osaka for 10 days and only spent ≈ $700! That’s even less than $100 a day. Traveling solo made it easy for me to limit my alcohol intake and keep my necessities at a minimum while still fully enjoying every day and seeing a TONNE of places. I visited 20 out of the 22 things on my to-do list which is listed here on my “10 Days in Japan” post. Taking the two-night buses alone saved me at least $200. So traveling “relatively” cheap is totally possible too if you have any questions don’t hesitate to ask.

How Expensive is Japan?

So I hope I have helped answer some of your question”How expensive is Japan”. I know I had a lot of unknowns going into my trip and totally winged it but ended up loving the entire trip. Even when I would end up taking trains the wrong way I couldn’t help but just smile and laugh at myself because that’s just part of the experience, that’s part of the fun in traveling and going out into the unknown!