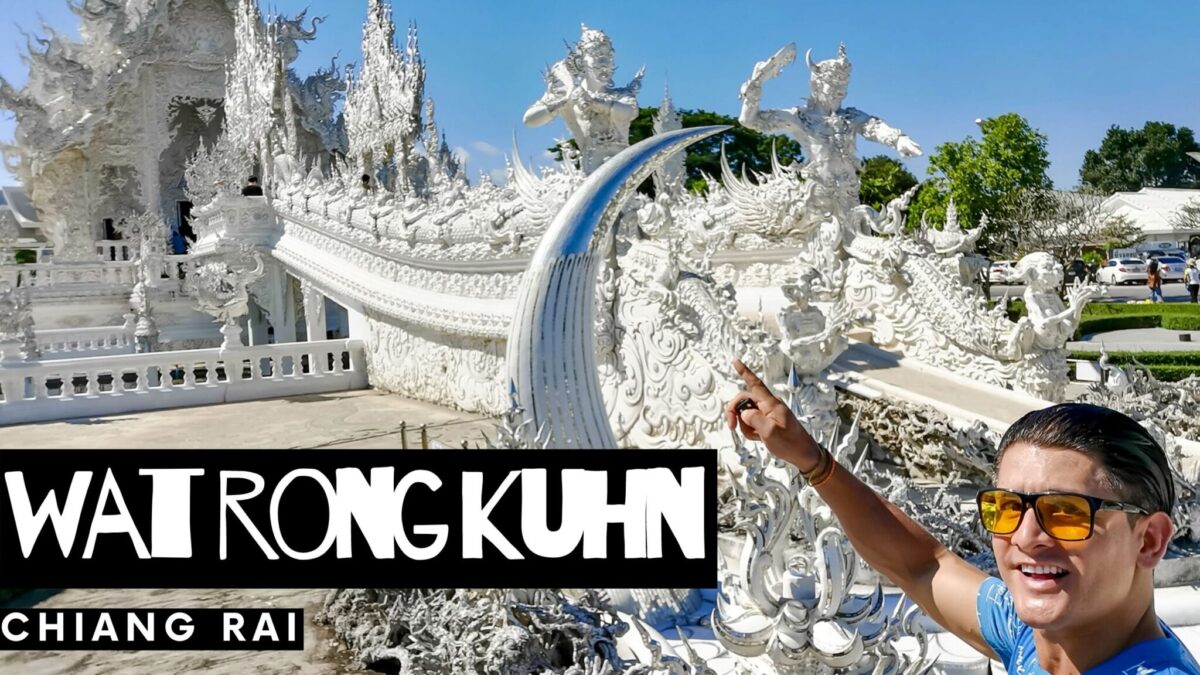 If you want to see one of the most unique and extraordinary temples in all of Thailand then I highly recommend visiting Wat Rong Kuhn. Located almost 4 hours north of Chiang Mai this glistening “White Temple” known by farang boasts some of the most intricate and interesting Buddhist artwork I’ve ever seen. For those who plan on visiting the best temples in Thailand, you certainly don’t want to forget this one. 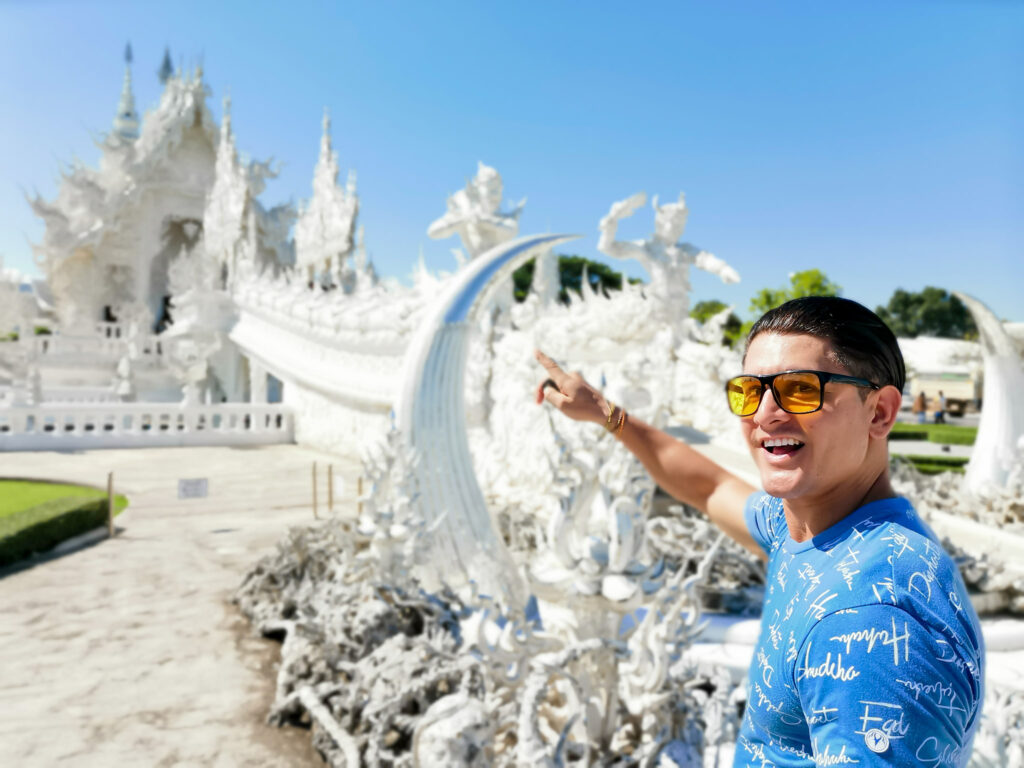 Wat Rong Kuhn in Chiang Rai is probbably better known as “the White Temple” to most people around the world familiar with th area and is one of the most recognizable temples in Thailand. Located just outside he town of Chiang Rai it attracts a large number of visitors year round, both foreigners and Thai alike, making it one of Chiang Rai’s most visited attractions. 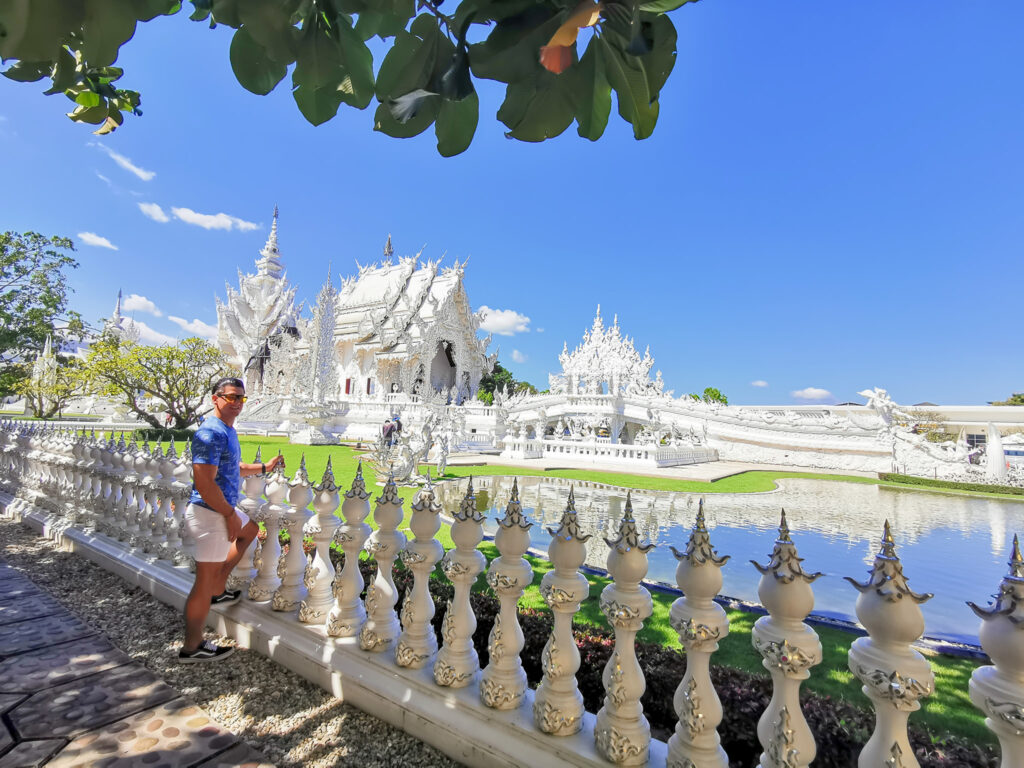 Wat Rong Khun stands out with its white color and pieces of glass built into the plaster making it sparkle and shine in the sun. The white color is supposed to signify the purity of Buddha, while the glass symbolizes his wisdom and teachings. 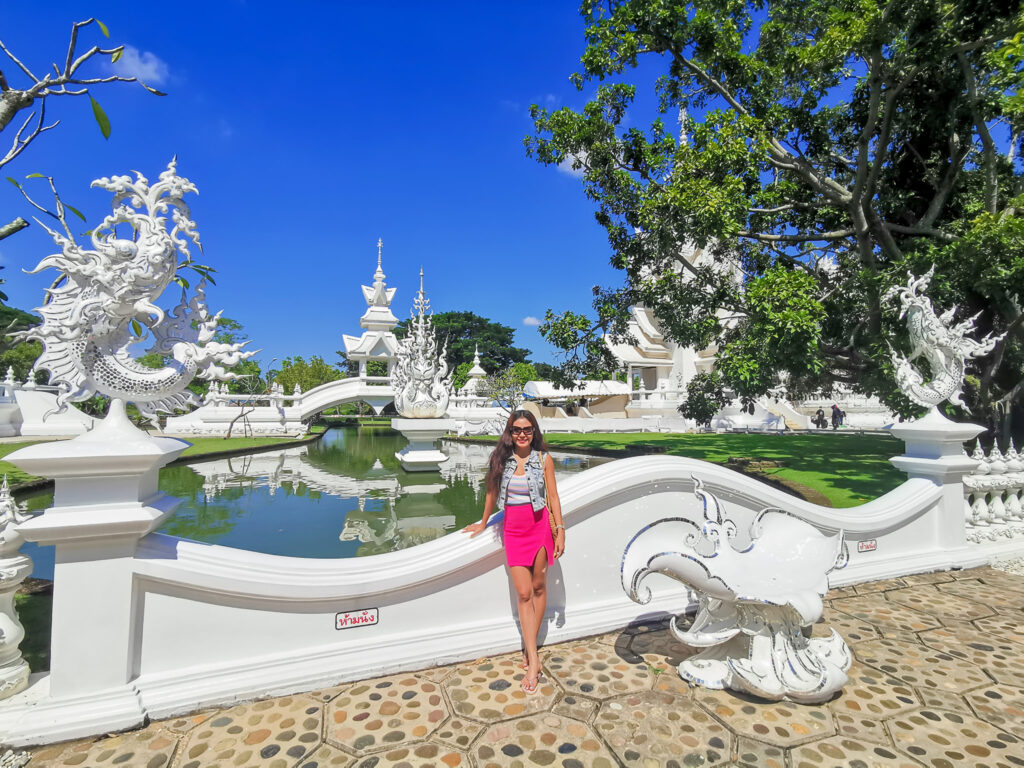 The White TempleWat Rong Khun was designed by Chalermchai Kositpipat, a famous Thai visual artist from Chiang Rai. The temple is actually still not finished to this day but will eventually have a total of nine buildings. This will include an ubosot, a hall to enshrine Buddhist relics, a meditation hall, monk living quarters and even an art gallery. 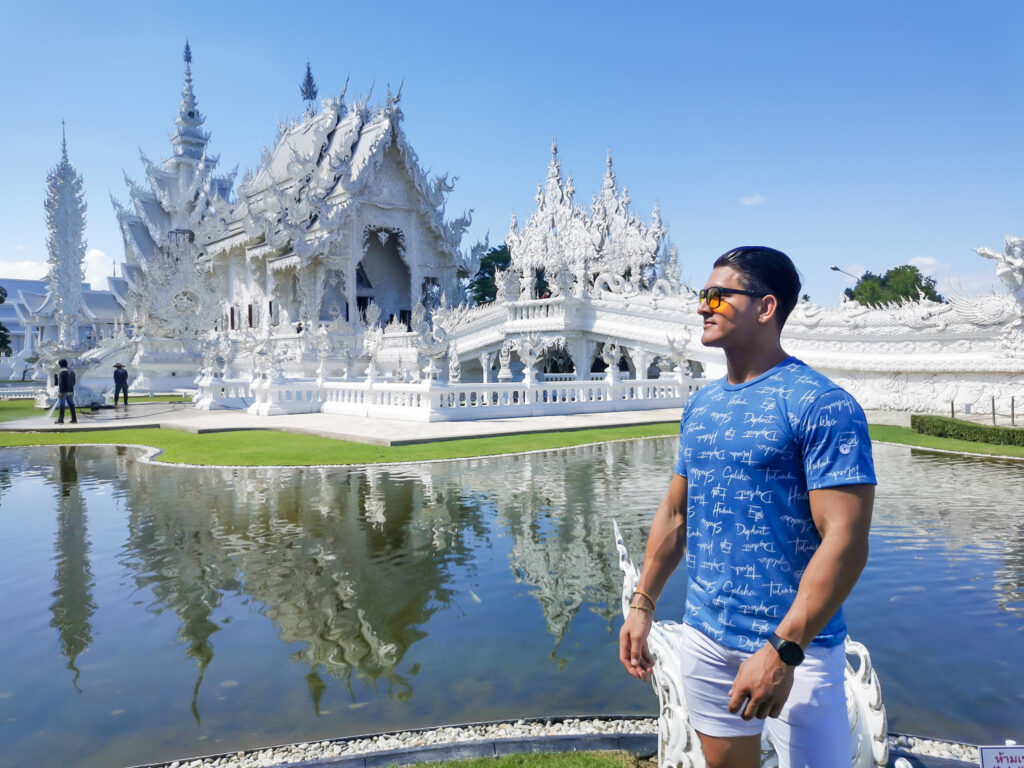 Chalermchai Kositpipat is an artist who was born in Chiang Rai and decided to completely rebuild the temple and even fund the project with his own money. As one of the most famous and renowned artists in Thaialnd, he decided to rebuild the temple as a center of learning and meditation for people to gain benefit from the Buddhist teachings. 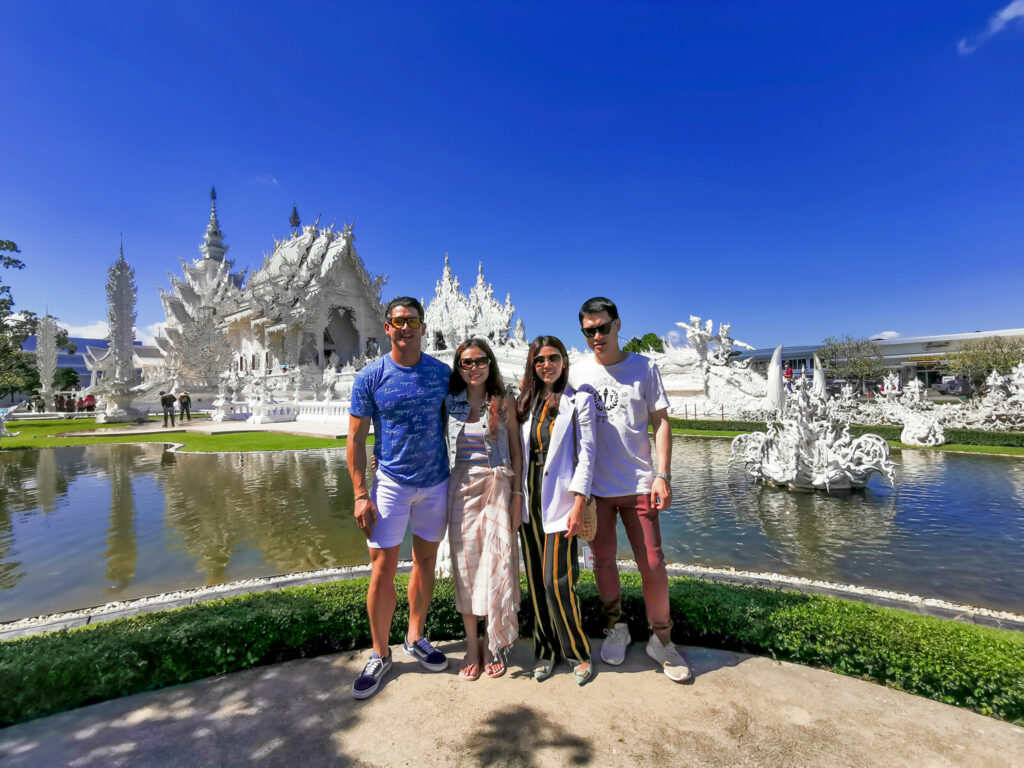 Every structure and detail of this temple was intricately thoughtout from the bridge of “the cycle of rebirth” to the “Gate of Heaven”. These are all intended to have meaning and encourage visitors to reflect on Buddhist teachings that show a way to escape from worldly temptations, desires and greed. 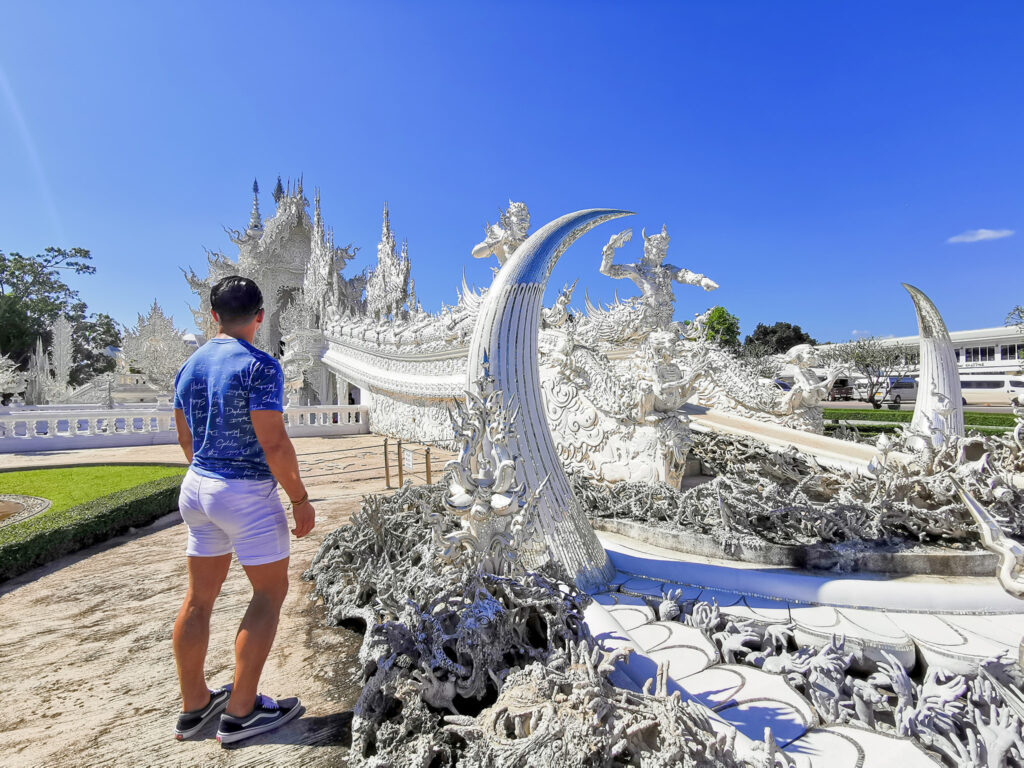 How to get to the Wat Rong Khun

The Wat Rong Khun is located just off Highway 1 (Phahonyothin road) about 15 kilometers South West of Chiang Rai town. There are tour guides you can take with air conditioned travel vans but we drove our self in a car, it’s much too far and dangerous to drive on a motorbike so I would not recommend this. There’s also still alot of ongoing highway construction which has been in the works for years, so plan on that adding some time on to your trip.

If you’re already in Chiang Rai then it’s fairly easy to get to the white temple using public transportation. Buses leave from the old bus station near the night bazaar in the center of Chiang Rai town. The trip takes around 30 minutes, fare is 20 Baht one way. Alternatively, charter a blue songthaew at the old bus station at about 300 Baht. 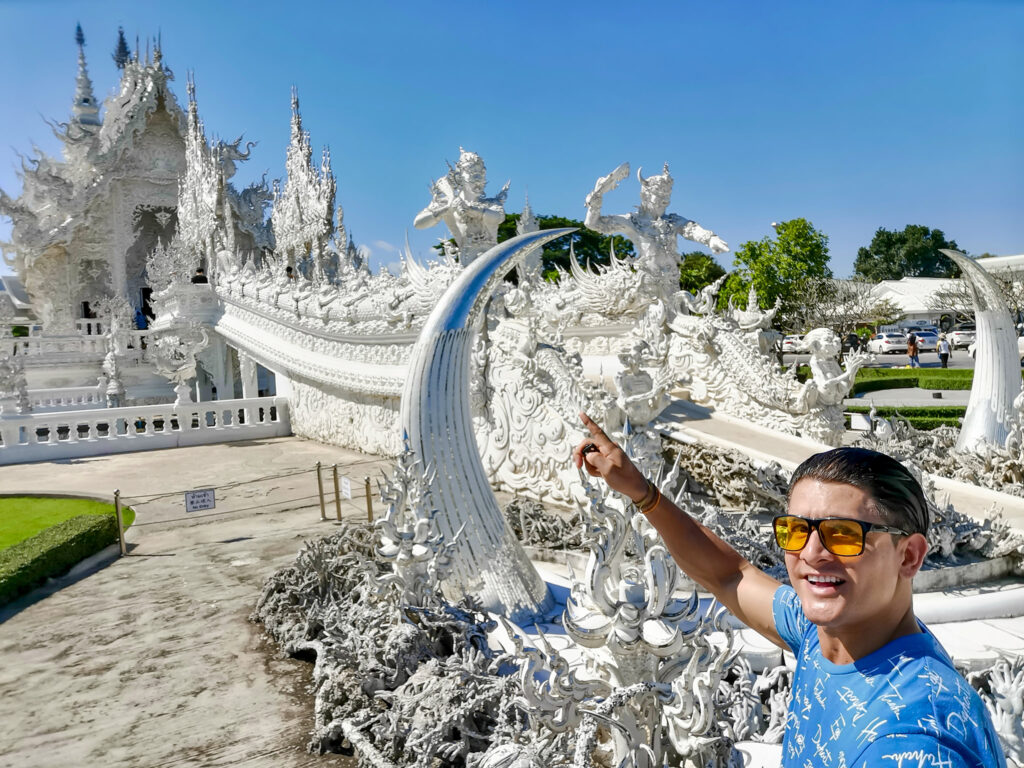 The temple opens daily from 8am until 6pm. The white temple is visited by both foreign tourists and Thai people but the locals typically visit mostly on on the weekends and Thai National Holidays. 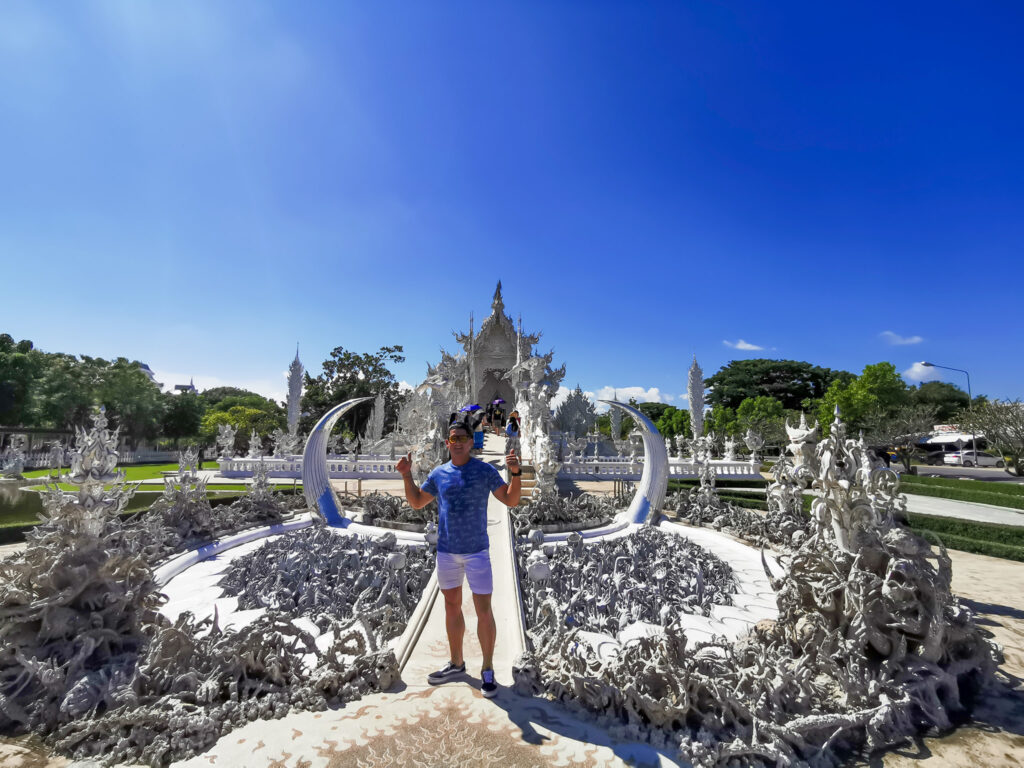 As with all temples in Thailand, it’s expected that you please dress respectfully, which means no revealing clothes. Also, don’t forget local Thai etiquette and remove your shoes before entering the temple building. Taking photos is also not allowed inside the main building. 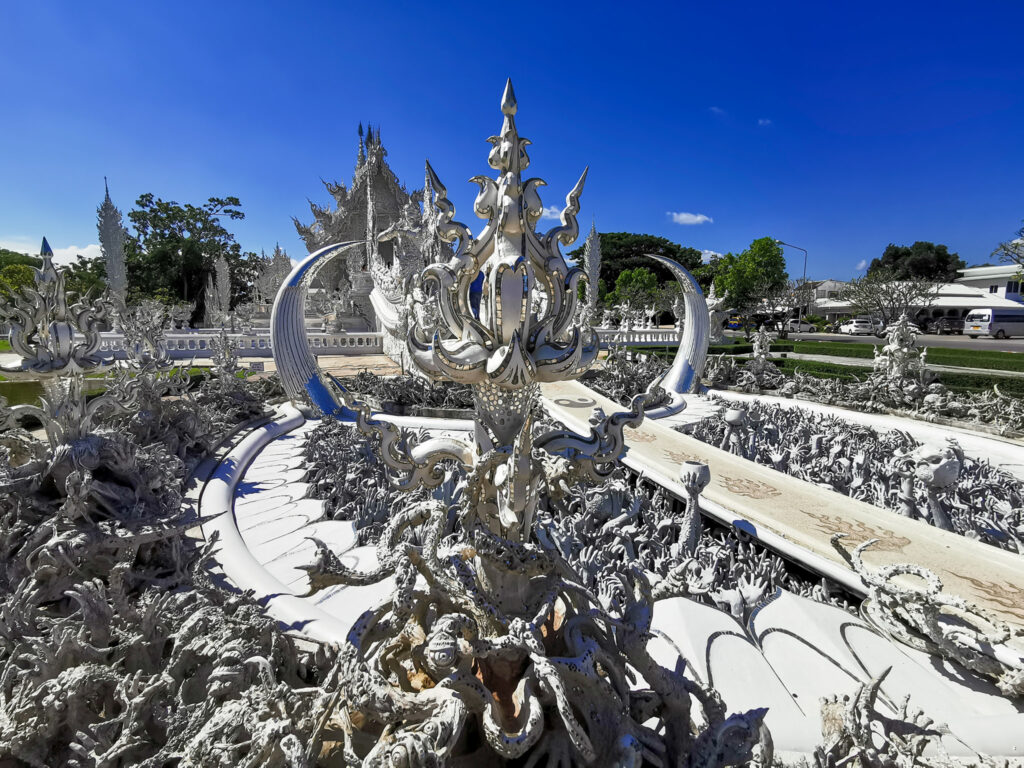 Admission charged at the ticket booth is 50 Thai Baht for both Adults and Children. 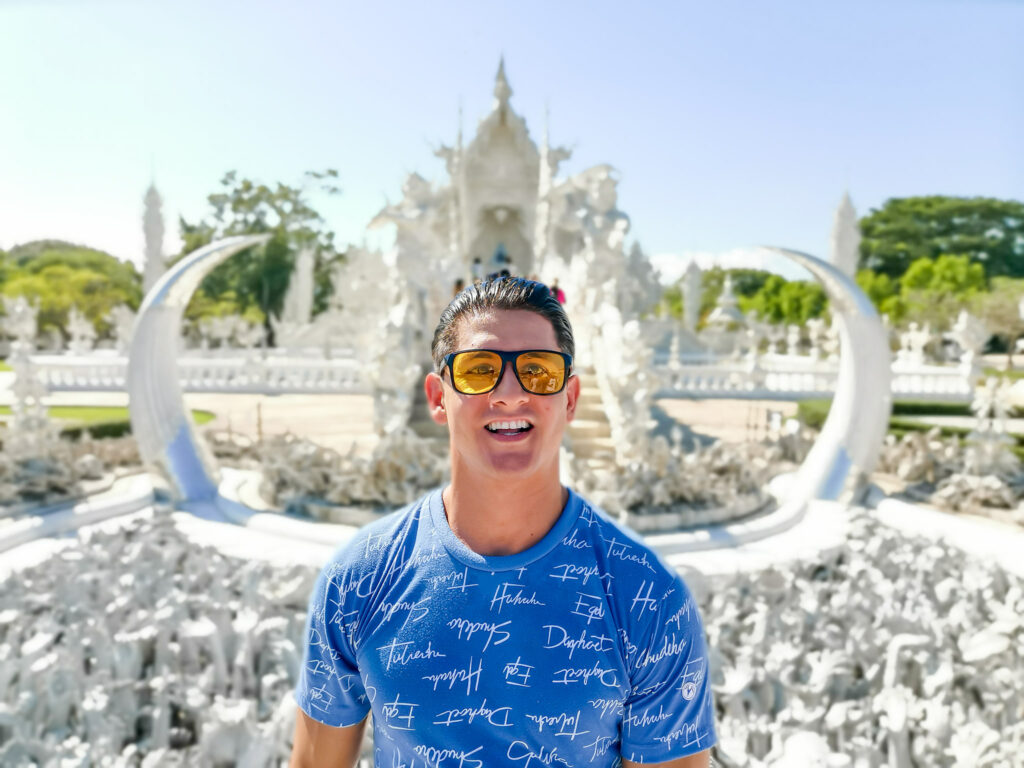 Wat Rong Khun (Thai: วัดร่องขุ่น) is perhaps better known to foreigners as the White Temple and is actually a privately owned art exhibit created in the style of a Buddhist temple in Chiang Rai Province, Thailand. It’s owned by Chalermchai Kositpipat, who designed, constructed, and opened it to visitors back in 1997. 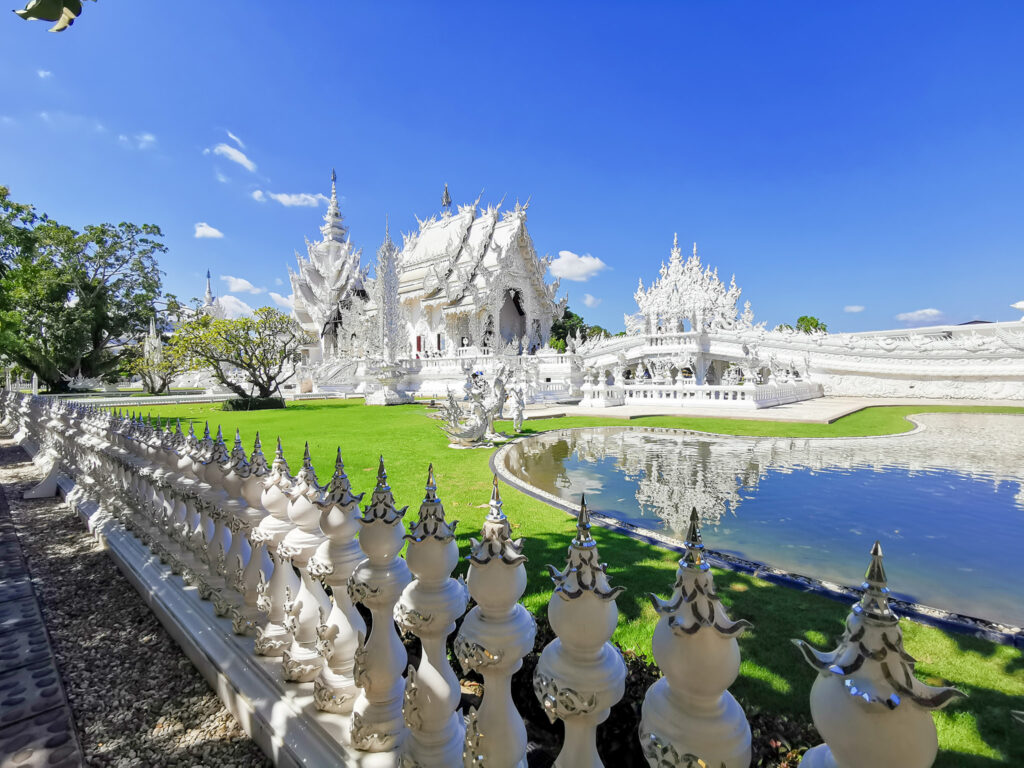