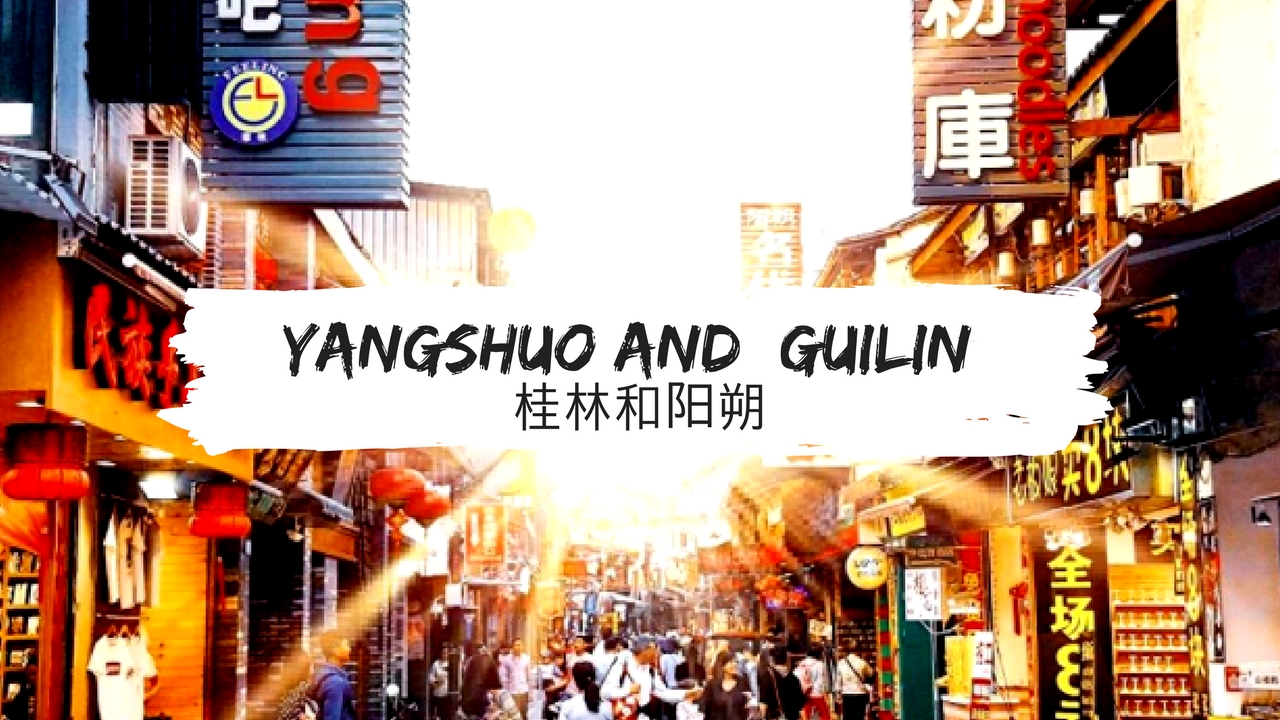 Yangshuo and Guilin in Southern China are located in the Guangxi province and have some of the most beautiful and interesting places in the country to visit. Located north of Nanning, the capital of the province, you can find these gems which embody all that southern China has to offer. From the incredible Karst mountain views to Li River tours, the air is clean and the land is green in this region of the country. If you are planning on visiting China and want to see more of the countryside instead of the busy cities like Shanghai and Beijing then this is where you want to go. 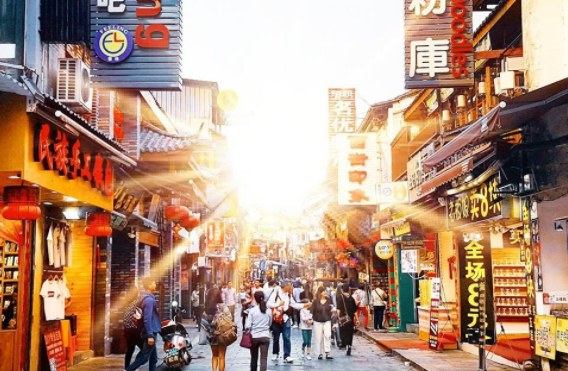 Being my first visit to China, I had all kinds of misconceptions about the country being raised under the influence of Western media, I had the impression that China was totally polluted, the people were mean and that it just wasn’t very appealing. These things could not have been further from the truth as I quickly found that the cities like Nanning were incredibly clean, modern and advanced. Most of the motorbikes are electric, there was hardly any traffic and the people were definitely friendly enough.

I originally landed in Kunming, spent the night, went and had some authentic hot pot then flew to Nanning. From Nanning, I took the train North to Guilin and spent a couple nights. I would highly recommend the train because it was a wonderful ride with excellent views of the mountains and country, plus I got a super comfy bed cabin for only about $10. The slow train takes about 5 hours, but the fast train which I took on the way back takes about half the time.

When you get to Guilin you can easily hail a cab to get to your hotel, I had to use Google Translate a ton here because not many people speak English. In Guilin there are many nice things to see like pagodas on the mountain as well as on the lake, walking streets and more. 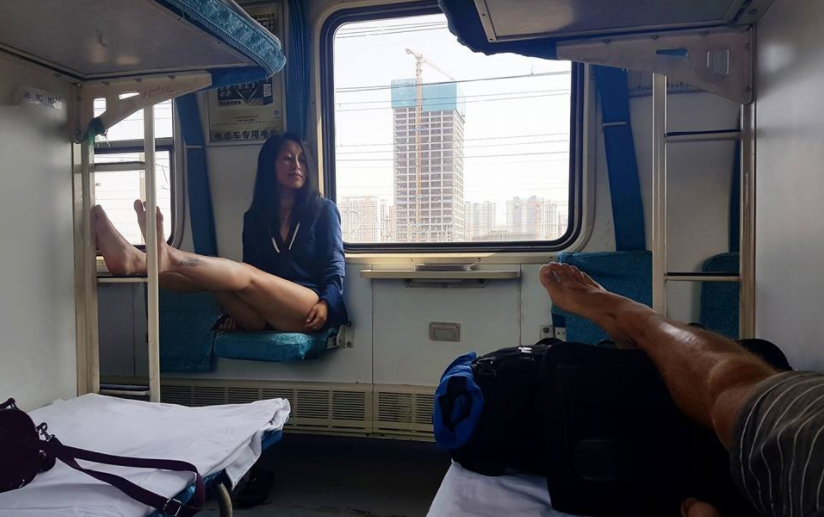 The Sun and Moon Towers

The Sun and Moon Twin Towers or Sun and Moon Pagodas sit on the lakes which are located in the Guilin Cultural Park. They are famous Chinese cultural landmarks, which combines the essence of traditional Chinese culture with other ideological influences like Confucianism, Buddhism and Taoism. 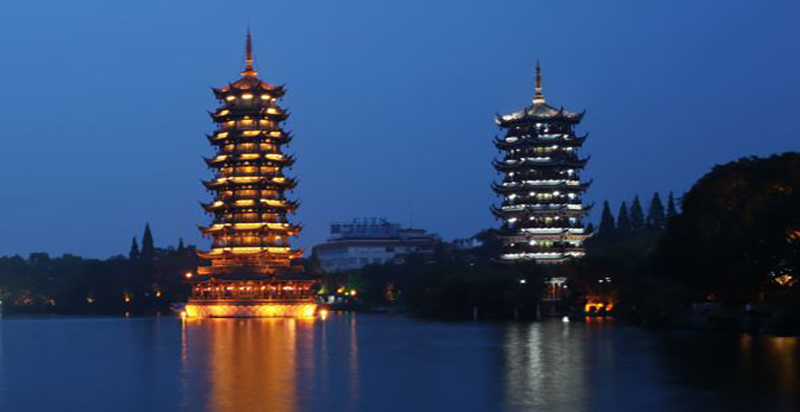 If you are looking for food then you should head to Xicheng Road Pedestrian Street. This place has all kinds of wild cuisine including some of the fried insects you would only expect from places like Thailand and Cambodia. 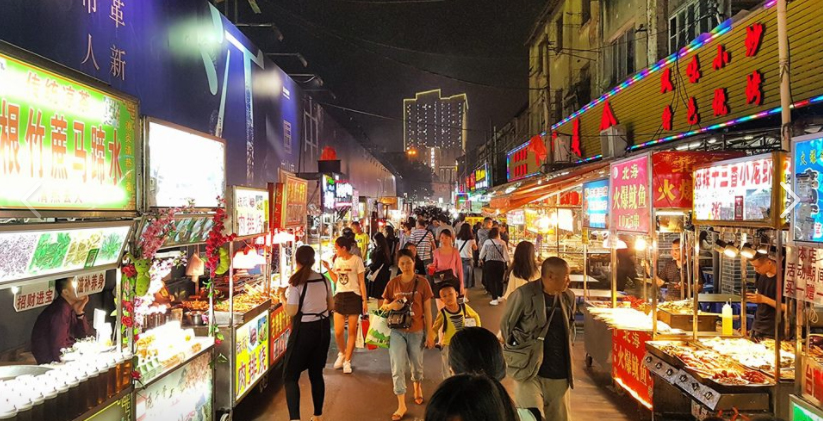 This is a very long street of food vendors selling all types of drinks and food, but what you may notice the most is the wide variety of seafood available. After you make your way through the walking street it conveniently connects to Zhongshan Road. 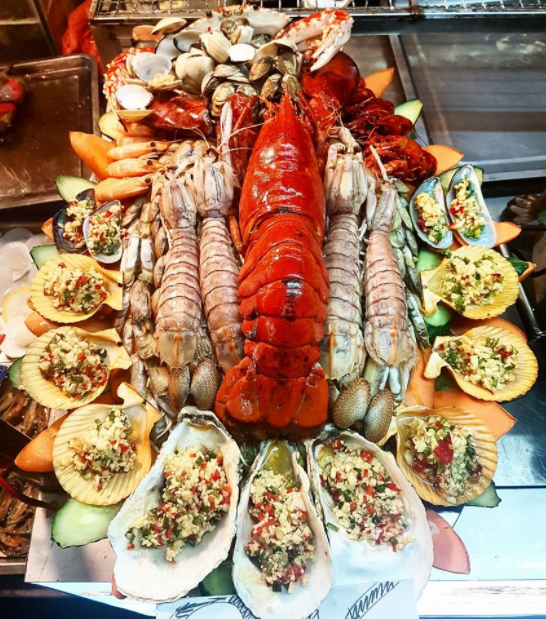 This pedestrian street has become a very popular night market where you can get all kinds of characteristic goods, entertainment and craft items. 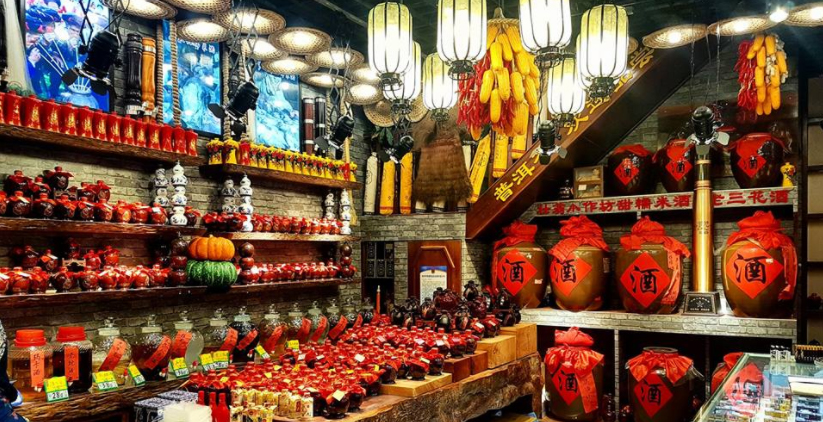 Zhengyang Pedestrian Street is the most famous commercial street in Guilin with a total length of 666 m, it is located near the central axis of Jingjiang King City, and the other side directly connects to the Two Rivers and Four Lakes. Zhengyang Street and a few streets surrounding form the current Guilin busy and prosperous area, jewelry, calligraphy and painting, arts and crafts, clothing, special local product, food and so on fill the whole street. Pictured above is a local Chinese wine shop where you can taste the wide variety of flavorful and potent wine selections.

If you’re looking for something fun to do during the day in Guilin then go check out the Seven stars park. It is named this after the 7 mountain peaks surrounding it that resemble the Big Dipper constellation. This park has plenty to see from the marvelous mountains, clear waters and elegant forests filled with plants and animals as well as cultural relics it’s a great place to bring the family. 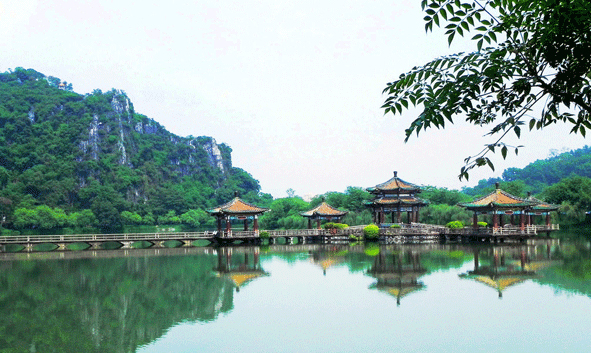 Last but not least you can take a boat tour or walk around the base of Elephant Trunk Hill. I believe the picture explains why it is called this. I would recommend maybe just walking around and taking pictures from nearby rather than the boat which was expensive in comparison to many other better things you can do and it only lasted about a half an hour. 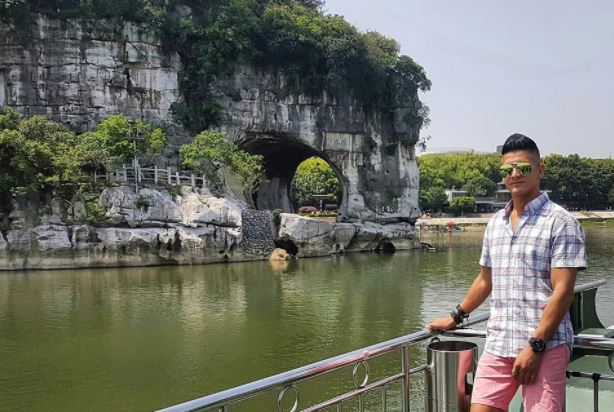 I honestly can’t say enough good things about Yangshuo. You can take a bus form Guilin to Yangshuo for around 100 rmb or $20 and the buses are really nice. It is located in the Northeast part of Guanxi province and is surrounded by beautiful Karst mountains that provide breathtaking views if you manage to climb one of them. It is also located next to the Li river making it easy to take a romantic and scenic river float. The town itself is packed with people and activities and the nightlife was very exciting which was a stark contrast to the other places I had visited up until this point in my trip from Yangshuo and Guilin. 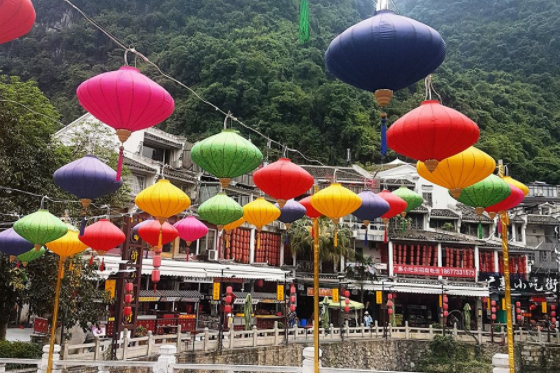 Unlike the rest of China so far, there had not been many foreigners but that may be because they are all here in Yangshuo. However, coming from Thailand where I am currently living it is nothing like that, I’m only mentioning that I was no longer the only foreigner around. This place has a ton of great things to do during the day and a very active nightlife in the evening going until 2am with loud bars, street food and various other merchants and forms of entertainment. 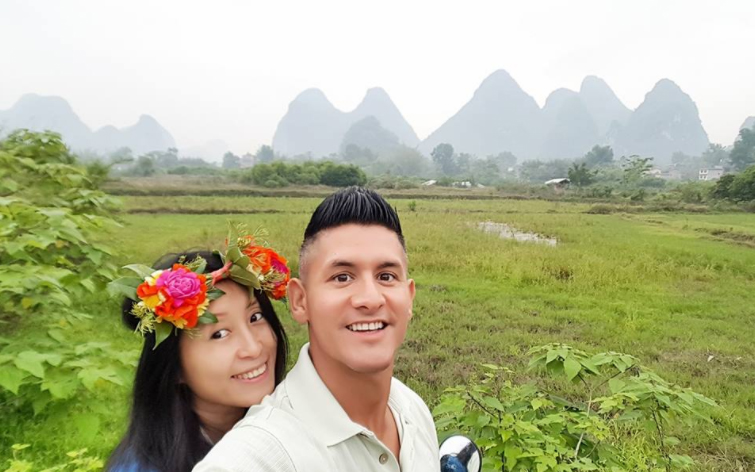 During the day you can rent an electric motorbike for around $10 and go exploring the countryside. If you ride about a half hour out of town you can come to the Li River where they offer bamboo raft rides for about $8 a person. The scenery is absolutely beautiful so get out of town during the day while you are there. There is also a famous arched mountain with a hole in it called Moon Hill nearby too.

One of the most popular attractions is taking a float down the Li River on the bamboo rafts pushed around with long poles and surrounded by the incredible towering Karst mountain ranges. The Li River cruise price cost between 50-200 rmb so it helps to have someone that speaks Chinese to help negotiate the price or you can may up paying a lot. 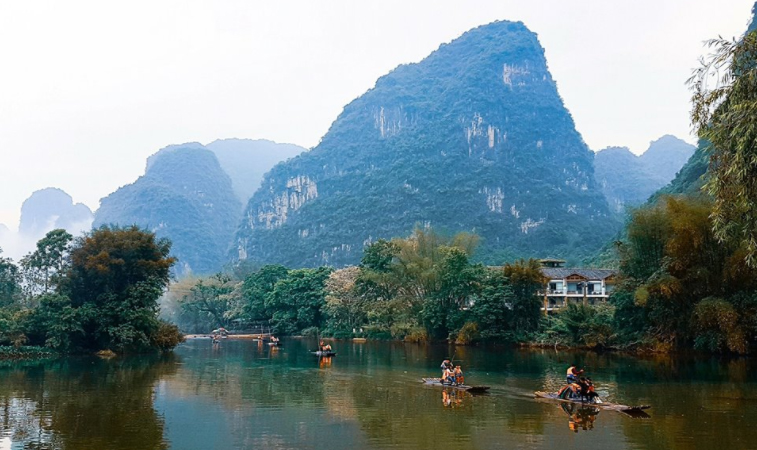 The impression of Liu Sanjie

After you make it back to town after a busy day of exploring and site seeing you can start your evening by seeing their famous local show called the “Impression of Liu Sanjie“. Unlike many other theatrical performances that are confined inside a theatre, this is a grand scale even with lights, music and hundreds of entertaining running around a colorfully lit lake and mountain backdrop. 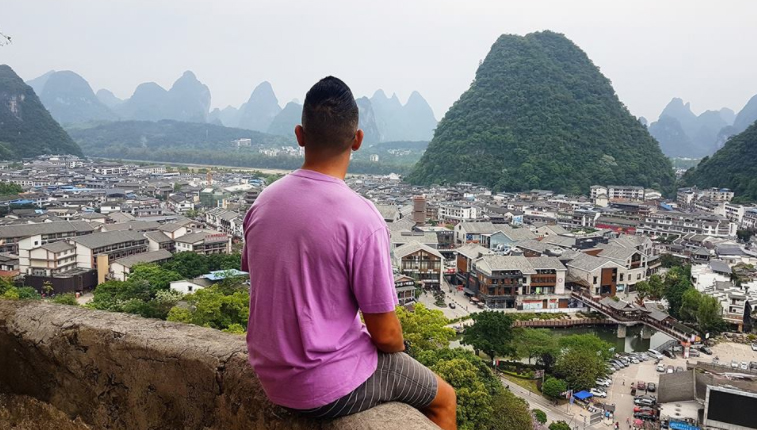 I would recommend heading outside of the popular city center to get food as prices are pretty steep in the touristy area. If you leave that part of town and head toward the park nearby then you will find yourself surrounded entirely by locals who like to hang out and talk, sing karaoke publicly and exercise. This park which I do not know the name of happens to have this hill with a pagoda on top which you can see from the bridge near the bar scene area to my right in the picture. All the mountains in Yangshuo and Guilin are rather steep climb but will only take maybe 10 minutes to ascend. Once on top, you can see how amazing and rewarding the views are. 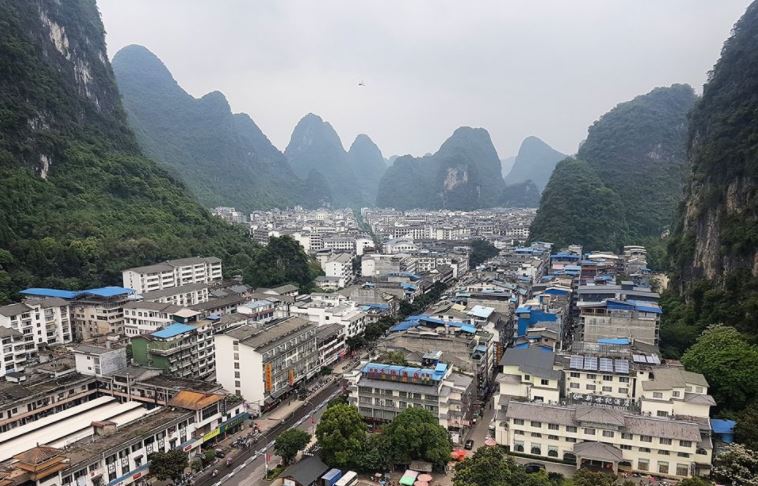 Well that’s all I have to say about my Yangshuo and Guilin trip in this post. There is so much more I could have written about so if you have any questions please leave me a comment or direct message me on Instagram at @nomadicnava and check out more posts here. I hope you found this information about Yangshuo and Guilin useful, Thanks for reading!